Pushing the envelope of Koh Phangan's music policy. With regular nights crossing all boundaries of music.

Ku Club invites DJs from all over the island to play at our venue. Here's a few of the regulars.

Since his relocation to Koh Phangan, Thailand, Graham has become the main resident at Tommy Resort every Full Moon and his residencies include Golden Vibes every Friday with German born DJ Venus Vibes at Mer Ka Ba and 2 new nights at KU. He has also played Thailand’s biggest annual festival, Culture One fours in a row. The change in environment has also led to a change in style. Although it was trance that saw him into the DJ Mag Top 100 DJ for 7(2 years at 22 and 5 years in the Top 40), aside from the Full Moon party, Graham’s sound is now tech house and techno.

His legendary shows on London's Kiss 100FM (House Nation in London and Friday Night Kiss networked all across the U.K – also reaching millions of listeners across the world online) plus his club night PEACH at The Camden Palace, the most successful club brand ever in the capital, made Graham the star that he is. Years of experience has taken him to all corners of the world playing for all the major brands and festivals, including Glastonbury, Homelands, Gatecrasher, Gods Kitchen, Passion, Slinky, Impulz, Earthdance, W.E.M.F., Summadayze and The Street Parade in Zurich. In fact he has played in almost 150 cities in over 43 countries!

Graham has sold over 700,000 mix albums across various leading brands including Kiss Mix, Kiss in Ibiza, Retrospective Of House, Club Cuts, Dj’s In The Box and his own albums Gold & Delicious for Logic/BMG, GG1/GG2 for Trust The DJ, Worth Its Weight In Gold for Bullion, and Full Of Beans for Urban Collective. There have also been covermount CD’s for M8 Magazine and Fast Car.

We'll have some information on Rory soon!

After learning to mix as a teenager in a mate's kitchen back in 1995 and playing events throughout the UK Rob Gritton took the plunge and moved to Koh Phangan in 2005.

Rob opened the legendary Beach Lounge Bar on the Full Moon Party beach in 2008 and quickly became made a name for himself as one of the islands most respected DJs and party organisers.

Rob became involved in many of the island's parties and eventually started playing in many of the major clubs, events and locations around Asia, playing a mix of House and Techno.

Rob currently holds residencies at JungleExperience, Pirates Bar, Ku Club and is a regular face behind the decks at many other venues in the region.

Rob has always been dabbling with dance music production from a very young age making many unreleased tunes dating as far back as 1995 eventually scoring a string of releases on various labels.

2013 saw the launch of Moon Island Records, Koh Phangan's 1st House music label, Rob is both the co- founder and artist for this label showcasing the island's fresh Underground House and Techno sound. Future tracks are in the pipeline so look out for new releases from Rob. "Music production is the next step for me, being able to produce and play my own music is a dream come true."

From 2008-2011 his weekly show “Propa Radio” ran every Monday night from 10-Midnight (+12 GMT) on Auckland’s UPFM (107.5fm or www.upfm.dj) showcasing the latest in UK Bass music including garage, dubstep, grime, funky, house and more. Previously he was on Boosh FM, and has guested on George FM in Auckland and Rinse FM in the UK. Keep an eye out in early 2013 for a brand new show, broadcast live and direct from Thailand on worldwide bass music radio station Sub.FM.

He held his first residency in a small club called "New Time" near Wiesbaden at the age of 15 (1992). Snoopoid got hypnotized by Frankfurts Nightlife back in those days including legendary Clubs like "Omen", "Dorian Gray", "Music Hall" and "The Box".

After moving to bavaria in 1996 he started the famous "Frankfurt Hardbeat Night"-Events in a club called "Baghira" in the interior of munich where he invited Djs and Artist from all over Germany (i.e. Monika Kruse, Dj Naughty, Richard Bartz, Lester Jones etc) to bring their Definition of Electronic Music to the Audience.

Returning to Frankfurt in 2003 Snoopoid held a residency for 3 years in the amazing "Moal Bar Lounge" in Offenbach where he flavoured his sets with a wild bunch of people like saxophone players, drummers and live singers.

In 2006 Snoopoid established the "Monchichi Club" and the "UMM - Underground Music Movement", a monthly Party Series in the legendary MTW building in Offenbach - right under the worldwide known "Robert Johnson"-Club. Also he has been one of the founders of the UNIQUE-Club Events (in the same facility) where he played with DJs like Pascal Feos, D.Diggler, Heiko MSO, Frank Leicher, Matt Star, Franksen and many more. "Monchichi Club" is nearly 6 years old by now and still going strong.

Ready for a change, Snoopoid moved to Koh Phangan Island in the southern Gulf of Thailand (The home of the popular Full Moon Party) where he lives and works until now. Here he is playing on Parties like Jungle Experience, Sramanora Waterfall, Pirates Bar, Backyard and many more, always trying to give the crowd the best music possible out of his nearly 20 years of knowledge within the scene!

Snoopoid has and never will be a "one music style"-DJ only. In his opinion the World of Electronic Music is far to divers to focus on one Genre only and it would be quite Arrogant to do so. Therefore he is well known to combine all kinds of styles in his sets- no matter if it is Techno, Elektro, House, Ambient or Triphop - old or new: "The Groove is the Mission"!

Hailing from the suburban town of Maidenhead in England, Euclid began his DJ'ing career at the age of 20, scraping together enough money for his first set of Technics. For the next 8 years Euclid was a true Drum and Bass soldier, playing on Pirate radio stations and at events throughout South East England.

After hitting the big 30 Euclid decided it was time for a change of scenery and upped sticks and headed to South East Asia armed only with a laptop and a determination to spread his love of bass heavy music to the masses.

Upon arriving in Thailand for the first time he supported Netsky at Beach Villages post new year party to some 2,000 people. He has since toured around South East Asia and China playing at venues in Laos, Cambodia and Shanghai.

With travels over there was only one place he wanted to be, the island where it all started. Bring on the bass.

Jourdan Bordes has toured the world over and performed alongside the biggest names dance music has to offer. He has graced the decks in cities like London, Dubai, NYC, Miami, L.A., Mexico, Hong Kong, Australia, Germany, Bulgaria, Thailand and many places in between.

His first remix is on a compilation with the likes of Moby, Peter Gabriel, Maroon 5, and many other greats.

We love to party at Ku. We also love to play music that no one else on the island plays. That's there's always a variety of parties and music genres at Ku.

We're currently in the process of arranging some great nights at the Ku Club. Keep checking back for updates.

How to find us

Turn right past the 7/11 and continue to walking street. Keep going down walking street as this street turns into the main Baan Tai Road. Go straight for 5 minutes (20 minute walk). Turn right onto a gravel road when you see our signs, we are located sea side across from the Yamaha shop. Follow the gravel road towards the sea straight to the end.

Take the road out of Haad Rin which joins Baan Tai Road and follow it straight for about 10 minutes. Turn left onto the gravel road when you see our signs, we are located sea side across from the Yamaha shop. Follow the gravel road towards the sea straight to the end.

Or find us on the map 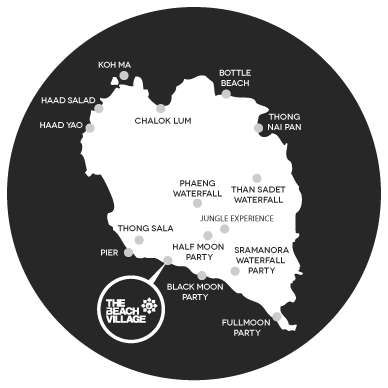